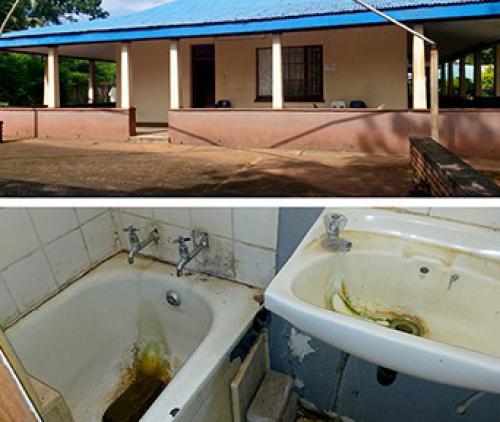 Photos top to bottom: Valdezia Clinic's building is the property of the EPC Church and does not even belong to the Limpopo Department of Health; The bathrooms at Valdezia Clinic are in a state of decay and neglect; and The Valdezia clinic is inaccessible for vehicles due to the very poor condition of the road.

Valdezia clinic in a “sorry state without proper supplies”

After numerous complaints were received about poor conditions at the Valdezia clinic, Limpopo Mirror recently set out to investigate. Upon arrival, the clinic was found in a worrying state of neglect and a serious shortage of staff. One registered nurse with one assistant nurse was serving an entire village. The clinic also does not operate at night.

The Democratic Alliance (DA) in Limpopo was the first to put the Valdezia clinic on the spot after an oversight inspection of the facility was conducted. Shocking conditions were encountered. The DA has since written to the Limpopo MEC for the Department of Health, Dr Phophi Ramathuba, to intervene urgently and address the challenges at Valdezia Clinic.

The DA’s Limpopo spokesperson for Health, Risham Maharaj, identified a severe shortage of medicine at the clinic. “There is no blood pressure medication, birth control medication or toddler and infant vaccines,” Maharaj stated. “The clinic also had extremely low stock of polio and malaria medication. There is a shortage of equipment – the incubator for new-born babies and the blood pressure monitor have not been functional for months.”

The clinic is inaccessible for vehicles because of the poor condition of the road and is apparently no longer being serviced by ambulances because of this. Staff members must park their vehicles quite a distance from the clinic and walk through the mud.

“The clinic is seriously understaffed and nurses struggle to cope with the large number of patients,” he said. “The clinic offers their service to about 2 000 patients a month, most of whom are patients with chronic conditions. Nurses’ accommodation is dilapidated, and they do not have functional toilets.”

Maharaj further claims that the clinic is running low on Personal Protective Equipment (PPE) and that no chairs for patients to sit on are available at the facility. “The unkempt grounds pose a risk to the patients and staff; there is very long grass around the premises and snakes are a frequent presence at the clinic,” he said.

Locals from the area voiced their concern that the state of decay and lack of proper supplies might also be putting the health of the clinic staff at risk. “We love the nurses because they take good care of our sick people, but it pains us to see them work in these unhygienic conditions, due to a lack of detergents and washing machines,” one resident said. “If a woman gives birth, the nurse has to handwash all linens, since there are no washing machines. It’s very bad.”

A detailed media inquiry was sent to the Department of Health’s spokesperson, Mr Neil Shikwambana who, after several attempts to get feedback on the matter, replied: “We have received the complaint about Valdezia Clinic and have requested the District to give us a full report on the issues being raised, so that we can get to the bottom of it,” he said.

“For instance, how is it that the clinic has severe shortages of medication, while medication is available at the pharmaceutical depots? All that clinics need to do is to order. Hence, we need a comprehensive report, so that the challenges can be addressed,” he said.