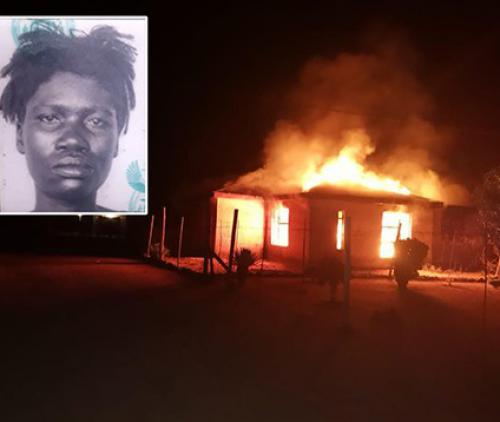 Angry community members of Madabani village burned down five people's houses, whom they believe to be part of a gang of criminals in the village. Inset: Mushathama Matshili was murdered in the early hours of Sunday, 6 June. Photo supplied.

The body of Mushaathama Matshili (41), a resident of Madabani, was found in the Ravele area on Sunday morning, 6 June. She was presumably raped before she was killed, and her body was dumped in the bushes between Ravele and Madabani villages.

The spokesperson for the police, Brig Motlafela Mojapelo, said that, although they believed Matshili had been raped before being murdered, as her pants were lying next to her body, this was yet to be confirmed by the post-mortem. A case of murder was opened.

“The dedicated team of police officers managed to arrest a man in connection with the incident shortly after Matshili’s body was found. The suspect, Lerato Thato Motsoko (27), was charged with murder,” Mojapelo said.

Motsoko appeared in the Tshilwavhusiku Magistrate’s Court on Tuesday, 8 June. The case was postponed to 15 June for a bail application.

Livid community members went on the rampage after they had heard that Motsoko was connected with the rape and murder of Matshili. They believe him to be involved with a gang of criminals in the village, so they burnt down five people’s houses, including the suspect’s, as well as a car.

No one had been arrested in connection with the arson at the time of our going to press.

Matshili’s brother, Mr Ndivhudza Khangala, said the last time he had seen his sister had been when she had left for a tavern in Ravele on Saturday. Ravele is nearly three kilometres from Madabani.

“We were happy to hear that a suspect had been arrested. We are putting everything in the hands of God, who will take care of the situation,” he said.

Matshili is survived by her five children, the youngest being only six months old.

Ms Monica Raphalalani, secretary of the local SANCO branch, said that the area had been notorious for killings and other criminal activities years ago, but that, through a partnership with SANCO and the local police, they had been able to bring the problem under control and the area had become safer again. “We are very concerned about the recent killings in our area. In a very short space of only three weeks, three people were reported dead,” she said.

“As a community, we will not sit down and fold our arms while our village burns down. We are planning to hold a meeting and come up with ways to combat this scourge after consultations with other structures and the local traditional leader,” she said.