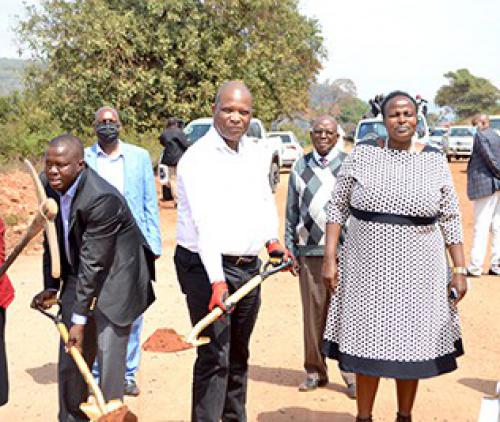 The MEC for Public Works, Road and Infrastructure, Mr Namane Dickson Masemola, intervened and re-opened the abandoned Bermuda Road-project, from Vhurivhuri village to Masisi Road, which had been dormant for five years, during a sod-turning ceremony on Wednesday, 1 September.

The project, comprising a 25,2 km stretch of road, experienced several disruptions and difficulties. However, when Masemola was appointed MEC in 2020, he visited the communities around Vhurivhuri and Makuya and promised them that he would ensure that the abandoned road got tarred to make life easier for the communities.

“We want communities around Vhurivhuri and Masisi to allow the contractor to complete the road without interruption, so that road users can enjoy roads that are in good condition, making an end to the dusty dirt roads in the area. The road will connect the Kruger National Park and Mozambique through the Pafuri gate, thus unblocking the socio-economic spin-off,” Masemola said.

The MEC was joined by the CEO of Road Agency Limpopo (RAL), Mr Gabriel Maluleke, Thulamela Mayor Humbulani Mulovhedzi, Thovhele Gole Mphaphuli, Thovhele Hanyani Tshikundamalema and other councillors from Vhembe, Musina and Thulamela when he handed the R112 million project over to the contractor, Silas Ledwaba of Lilithalethu Trading. The handing-over event took place at Tshibalo Primary School in Vhurivhuri-Matovha village.

The remaining section of the road to be constructed is scheduled to be completed within 11 months and unemployed community members from the area will be granted temporary employment opportunities during this time frame.

Senior traditional leader Thovhele Gole Mphaphuli was very excited about the project and said transportation would become a lot easier, as the communities had been suffering on the slippery and dusty road.

The project’s steering committee chairperson, Mr Prince Phandavhudzi, said that they had learned the hard way how important developing a steady, good relationship with the contractor and engineer of such a project was to speed up the process and eliminate misunderstandings, as they had had with the previous contractor, who had later abandoned the contract.