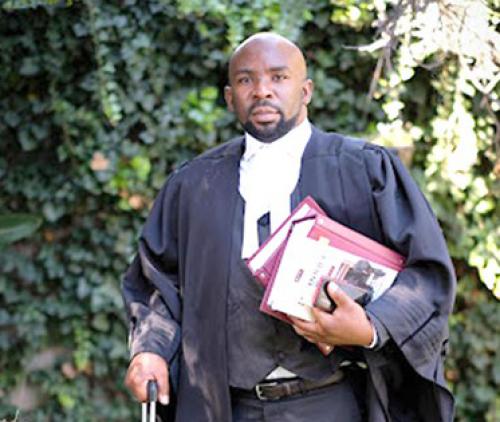 From police constable to advocate in the High Court

A former police constable, Mashudu Isaac Tshisikule, has inspired many in the South African Police Service after graduating with an LLB degree from the University of South Africa (Unisa).

Tshisikule (36), of Maniini Village near Thohoyandou, started his primary education in 1991 at Tshiulungoma Primary School. After completing matric in 2004, he found himself in the wilderness as all attempts to get registered at the University of Venda were in vain.

A chance to further his studies at tertiary level became available in 2007 and he enrolled for a small course to qualify as a Basic Ambulance Assistant in Pretoria, where he obtained a level-5 certificate.

According to him, job hunting with a mere certificate in hand was not enough, and he enrolled for a national diploma in public management with Professional FET College. After completing the course, he went back home but realised that jobs were scarce.

“This prompted me to find a piece job at Ligaraba Funeral Services and Tombstones. My job description was spade work, erecting tombstones in the cemeteries and washing the service vehicles. We sometimes used to sleep in the graveyard just to make sure our job was well done,” he said.

“On the other hand, I was a volunteer in the local youth-against-crime structure, a programme that was spearheaded by the SAPS to fight crime in and around the Thohoyandou CBD during festive seasons. From 2010 to 2012, I was a secretary of the Vhembe District Municipality Youth Council, a nonpartisan youth organ advocating for youth economic emancipation and recognition across all areas.

“Before finishing all these programs, I received a call from the SAPS that my application to be trained as a police officer was acknowledged, and I spent six months in the police academy,” he continued.

“After graduating from the police academy, I was stationed at Levubu, Giyani and Thohoyandou police stations. I was in the crime-prevention unit and later moved to crime investigations. These units sharpened my mind regarding court proceedings and how the Criminal Procedure Act is applied. I used to sit with prosecutors in the courtroom, discussing cases, and that was where an interest inr doing a degree in law engulfed my mind,” said Tshisikule.

“In June 2013, I enrolled for an LLB with the University of South Africa (Unisa). This was a very tough educational journey because my police job was very demanding. I also had financial problems that couldn’t be solved by my SAPSs salary. Mom and my fiancé helped me settle the outstanding balance. I am beyond grateful to have had their support,” he said.

“My financial woes ended in 2017 when I got a three-year contract at the office of the Minister for Public Service and Administration, Ms Faith Muthambi.” During his graduation celebration, Adv Tsietsi Ramatsekisa invited him to consider joining the bar. In February 2020, he resigned and joined the bar in Polokwane as Pupil Advocate.

“After successfully completing the pupillage program, I was admitted by the honourable Justices Muller and Kganyago of the Limpopo division of the High Court.

Tshisikule urges the youth to take their studies seriously as it will enable them to participate in the running of the country. “I spent seven years to complete my degree. Only the sky is the limit if you are determined,” Tshisikule concluded.