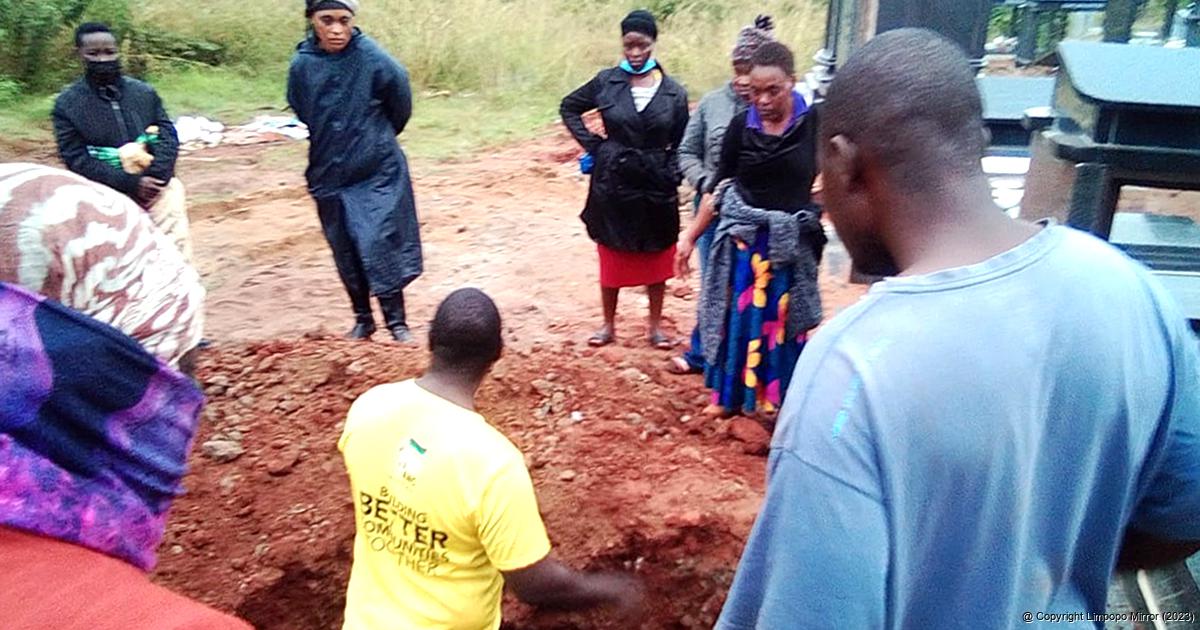 The Mathivha family and some community members watch as the late Ndamulelo's grave is being exhumed. Photo supplied.

'Our son was stolen and is now a zombie'

The Vhembe region has become a place of wonders and strange happenings of late, with supposed zombies roaming the area. In the latest incident, a family from Lwamondo Gelebe outside Thohoyandou claim that they had exhumed the grave of a young, deceased family member, only to find a strange doll where the body was supposed to be.

Eighteen-year-old Ndamulelo Mathivha died after a long but unspecified illness in March this year. Just before he died, though, he apparently told his family strange things, like premonitions or visions. He told them that some people were going to put him into a hole with sharp razor blades, and that they should take him out of the hole if this happened. Though finding this very strange, the family followed his shocking request, hoping to find him alive.

Ms Eunice Mathivha, Ndamulelo’s mother, told the media that the family members were convinced that the young man had not died but was captured by jealous people who were keeping him as a zombie.

“My son had been sick for some time and passed away at the beginning of March. It was around 12:00 and we kept his body in the house until 23:50, as his limbs had still not become stiff, like a normal dead body. We had hoped that he would wake up, but seeing that he was not coming back to life, we decided to take him to the mortuary, where his body was kept for two weeks. We were still hoping that he might wake up, as he had promised, but that did not happen,” she said. Ndamulelo was eventually buried on 26 March.

“What he told us before he died made us consult prophets and traditional healers. They made us believe that he is still alive and that is why we exhumed his body [on 27 April]. When the grave was opened, there was no bad smell coming from it, like we expected from a dead body, and when we finally opened the casket, we were shocked to find not my son but a doll inside the casket. He has been made a zombie and we know who is responsible for this and we will not leave this matter lying. We will stop at nothing to see that he is brought back to life. We will soon have a big church ceremony, and we know he will come back alive,” Mathivha said.

Ndamulelo’s brother, Mr Jonas Mathivha, corroborated the mother’s version of the events. “I am the one who opened the coffin, and it was not my brother lying there. My sister took a picture of the doll we found inside. My brother was taken away by someone, but we strongly believe he will be brought back to life soon,” he said.

This story has not only caused an uproar in the village but has become a popular discussion topic throughout the region. Social media is abuzz about the incident, with staunch followers of African rituals backing the family in their belief that Ndamulelo was made a zombie.

However, some community members who were present when the grave was dug up have a different story to tell.

Limpopo Mirror visited the family and the gravesite where Ndamulelo was buried on Tuesday. The grave had clearly been tampered with recently as traces of fresh soil could be seen.

Munna Ndi Nnyi Men’s Forum chairperson Mr Bardwell Mufunwaini, who initially dealt with the case and also went to the grave, said he doubted the family’s version very much. “When a person is buried, it undergoes many changes. The family cannot expect to find him the same as he was before he was buried. They confirmed that they saw the body before burial and the elder brother confirmed there was a bad smell upon opening the coffin. I doubt very much that a doll could smell bad,” he said.

Community leader Mr Takalani Ramanugu of the Gelebe Royal Council said they had deliberated on the issue with the family, and that he was among those who had gone to graveyard to witness the exhumation. He said they had agreed to meet at the deceased’s family’s house to ascertain that permission had been granted by the court to exhume the body.

“On arrival at the house, they were long gone with their traditional healer. We found them at the graveyard, nearly done with the digging. It seems they wanted to do everything in our absence, and we suspect a sinister agenda. The situation was very bad as we had to close our noses because of the bad stench. The body was in a state of advanced decomposition. The family must just accept that the man has passed on and learn to live with it, but they are in denial. We are not stopping them from pursuing the matter, but we are no longer involved,” he said.

Well-known traditional healer Maine Vho-Tshivhonammbi Netshivhambe advised the family to spare themselves financially as no one will be able to raise their son from the dead. “The raising of the dead ended in biblical times during the time of Jesus, and we know of no other instance after that,” she said.