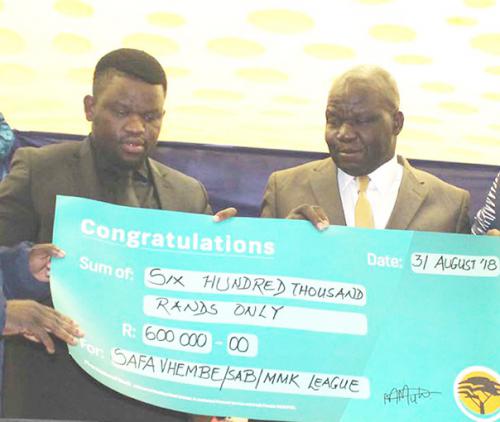 Mr Munei Mukwevho (second from left) hands over a cheque to the value of R600 000 to the treasurer of the league, Mr Philbert Ndove (right), while other dignitaries look on.

MMK to continue with sponsorship

During the ceremony, Mukwevho handed a cheque of R600 000 to the treasurer of the league, Mr Philbert Ndove. He further stated that one of the reasons that influenced them to sponsor the association was that his father, Mr Solomon “Miser” Mukwevho, had been a football player before he had retired to pursue his business venture.

A total of R934 500 in prize money was distributed to the 157 clubs affiliated to the association last soccer season. The region’s overall champions, Tshakhuma RO Nandilani, or Tron as they are affectionately called, received the biggest cheque. They received R60 000 and a floating trophy.

Berea FC, who finished in the second position in the Champ of Champs tournament, received R35 000. Mpheni Home Defenders and Wayeni Sea Robbers finished in the third and fourth positions and they were given R30 000 and R25 000 respectively.

During the ceremony the announcement was made that Tron will be campaigning in the ABC Motsepe League when the activities for the new season start in two weeks’ time. Their coach, Mr Mashudu “Coolio” Ndou, and the league's administrative officer, Ms Nancy Ramaru, also received awards during the ceremony. Ndou was acknowledged for representing the region in a dignified manner in the SAB League provincial promotional play-offs at the Nkowankowa Stadium in Tzaneen last month. Ramaru’s award was in recognition of her loyal and dedicated service during her 18 years with the league.

The activities of the league’s new season will start over the first weekend of October.