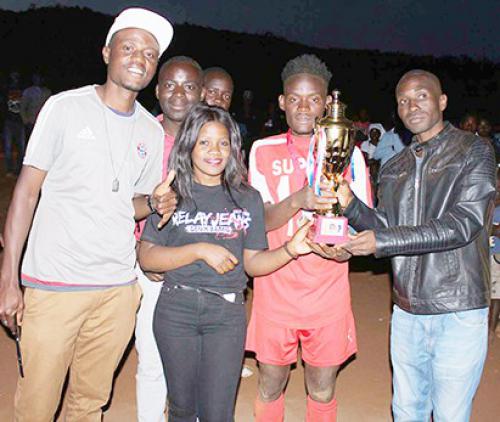 The captain of Supro, Rophuluswa Mavhelwana, (second from right) receives his team’s trophy from the sponsor, Cllr Bruce Maphiri, while other dignitaries look on.

Supro are the Bruce Maphiri champions

Sambandou United Professionals, or Supro as they are commonly known, proved all their critics wrong by beating Berea FC 6-5 in the final of the Bruce Maphiri Soccer Festival at the Makuya Maholoni grounds on Sunday.

It took them nine minutes to open their account. Tshilidzi Mundalamo, the Berea centre back, miskicked the ball in an effort to clear. Khathutshelo Mmbengwa capitalized and beat the keeper with a half volley. The referee, Mr Chris Mugeri, warned Fhulufhelo Mathivha of Supro with a card, following a dangerous tackle on Awelani Mphigalale.

Berea fought back and Dakalo Ratshitanga forced his way through the defence of Supro and beat the keeper with a ground cutter to bring the half-time score to 1-1.

Supro regrouped from behind in the last half, initiating some dangerous moves from the middle of the park. Their efforts did not pass without reward as they reclaimed the lead in the 54th minute. Khathutshelo Mmbengwa completed his brace with a ground cutter after forcing his way through the defence of Berea.

Berea fought back and Awelani Mphigalale beat the offside trap and showed the keeper the wrong way. A scramble within the box gave rise to Supro’s third goal in the 74th minute when Maipfi Nemukula hooked in the ball.

Berea did not sit back and relax, although time was fast running out for them. They found the equalizer through Pfariso Mukoma two minutes before the referee blew the final whistle.

The winner was determined through penalty shootout as the score remained level at the end of the regulation time. Supro converted three from the white spot while Berea scored only two.

As the champions, Supro received R6 000, a soccer kit, a floating trophy and gold medals during a ceremony held at the grounds shortly after the final whistle. The runners-up took home R4 000 and silver medals.

The third- and fourth-placed teams, Musunda United Brothers and Ficus FC, received R1 500 each. The teams booted out in the quarter-final stage, Lukau FC, Phaphama All Stars, Rambuda Young Fighters and Maholoni Stone Breakers, each received R1 000. The remaining teams took home a consolation prize of R300 each.

The tournament was named after the local ward councilor, Cllr Bruce Maphiri. Cllr Maphiri was the sole sponsor of the annual event. During the ceremony, Cllr Maphiri praised the organizers, clubs officials and the players for their good conduct throughout the tournament. He said that he would continue to sponsor the tournament in the coming years, saying the sponsorship amount would also increase with time.

Shudufhadzo Ndou of Berea is ready to kick the ball, while Matodzi Muvhango of Supro is on his heels.