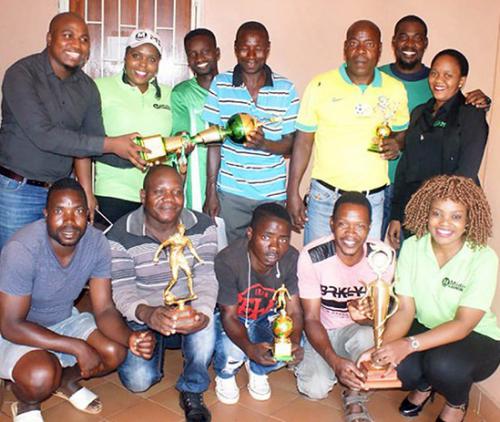 Sponsors and  team officials display the trophies during the launch of the tournament.

The annual Midey Charity Cup tournament that is to be played on Youth Day (June 16) at the Rabali Mini Stadium was launched on Friday.

The event was attended by participating teams’ officials and the sponsors. The tournament, which has become one of the most important days on the calendar of Midey Trading CC, was won by Mulodi Young Santos from Mutale last year.

In the first semi-final, Tshithuthuni RPM will play against Rabali Pull Together, and Mukosi Santos will meet Shanzha Continentals in the second semi-final.

During the event, which will start at 08:00 on Youth Day, well-known reggae icon Khakhathi and Friends and DJ Telkom will entertain the crowds, while comedian Bundu will be the master of ceremonies.

Ms Muofhe Nesane, the marketing manager at Midey, said that the tournament was a way of ploughing back into the community that supported their businesses. "We have taken a decision to take the youth from the streets at least once a year and bring the community together for a game of soccer. Last year, we were at Tshilamba, and this year we decided to host teams from the Nzhelele area," she said.

According to her, the prizes for this year have improved tremendously and none of the participating teams will go home empty handed.

The tournament is the initiative of Midey Trading CC, a finance and funeral company owned by businessman Ayodele Ogunrinde and his wife Olive.