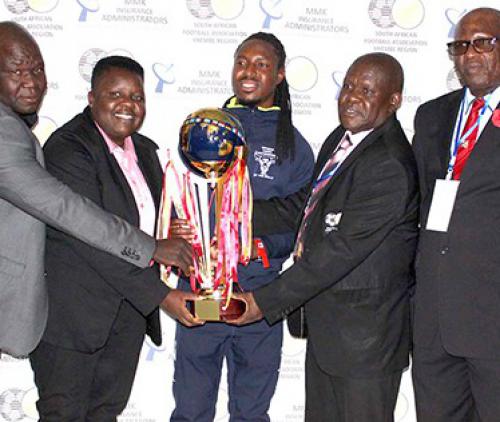 Last Friday was payday for the clubs affiliated to the Safa Vhembe MMK Administrators League last season. The glittering ceremony was held at the Munakisi Hall in Muledane and about R1 million in cash prizes was distributed to 153 clubs during the ceremony.

Mpheni Home Defenders went home with the most money. They received R60 000 and a floating trophy during the ceremony.

They were the region’s overall champions after finishing on top of the log in the champ of champs tournament. They also represented Vhembe Regional Association in the provincial playoffs, which were staged at the Jane Furse Stadium in Sekhukhune three months ago. Unfortunately, they did not make the grade in the provincial playoffs as they finished in the third position.

Teams that finished between the second and the eighth position in their respective streams were presented with cash prizes ranging from R10 000 to R5 500. The remaining clubs received R3 000 each.

When delivering the keynote address, the chief operations officer of MMK Insurance Administrators, Mr Munei Mukwevho, said that his company would continue to sponsor the Safa Vhembe Regional Soccer Association in the coming season.

During the ceremony, he presented a cheque to the value of R650 000 to the treasurer of the association, Mr Jabulani Ndove. The association received the same sponsorship amount last season. According to Mukwevho, the relationship between his company and the association is now eight years old.

During the ceremony, the announcement was made that the last two teams in their respective streams would be relegated to the lower division and that the league activities for the new season would start over the weekend of 5 and 6 October.

The players of Mpheni Home Defenders celebrate with their trophy and cheque during the ceremony.