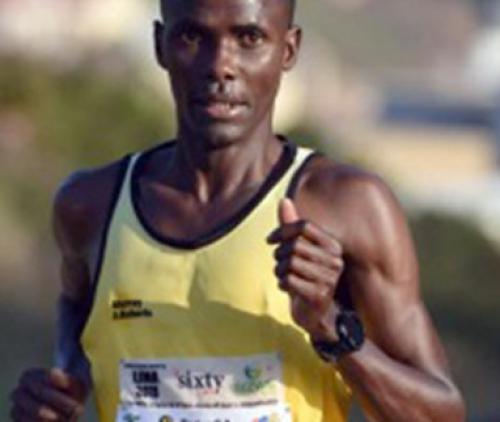 Timothy Munzhelele, winner of the Land of Legend Marathon.

The 35-year-old Timothy Munzhelele of Vuvha in the Thengwe area won the Land of Legend Marathon from Thohoyandou to the Mphephu Resort on Saturday.

He is a member of the Murray and Roberts Athletics Club.

The marathon was staged by the Thohoyandou Athletics Club, and apart from the marathon race (43,2 km), athletes could also participate in a half-marathon (21,1 km) or a 10 km road race.

The race was last run in 2010 and the champion that year was Brighton Chipere from Zimbabwe.

Munzhelele finished the race in 2:33.36. Clement Maluleke of the Vhembe Athletics Club finished in second position in 2:34:19, with Calvin Malatjie from Murray and Roberts third in 2:41.31.

Munzhelele went home with R4 000, while Maluleke received R2 500 for his effort. The third prize of R1 500 went to Malatjie.

The women’s marathon was won by Thabitha Tsatsa of Nedbank Athletics Club in a very good time of 3:18:00. Joyce Netshitodzhe from Murray and Roberts finished second in 3:33:47, and Jane Mudau of Faranani Athletics Club was third in the women’s race and first in the category for veterans.

The result of the 21,1km race for females was Sedzani Maluta of Vhembe Athletic Club (1:46:07), Jennifer Sebola of Gazelles Athletic Club (1:47:22) and Mpfariseni Mamedze (1:54.12. Fhatuwani Mushiana won the half-marathon for men, with Hluvuko Musapa in second place.

After the race, winner Munzhelele said that he was happy to win the marathon for the first time. He said that he was going to participate in the Comrades Marathon this year. He appealed to other athletes who want to achieve their goals to put everything in God's hands. “It was a tough race for me, but everything went as planned.”

Mr Sam Munyai from the Thohoyandou Athletics Club said that they would improve the race next year. He said that he was happy with the attendance of the runners, who came in large numbers. He thanked the sponsors, Radzambo Cultural Foundation, Matsila Development Trust, Mulenzhe Development Trust, Nandoni Golf Estate, the Mami group and Lushika Water.