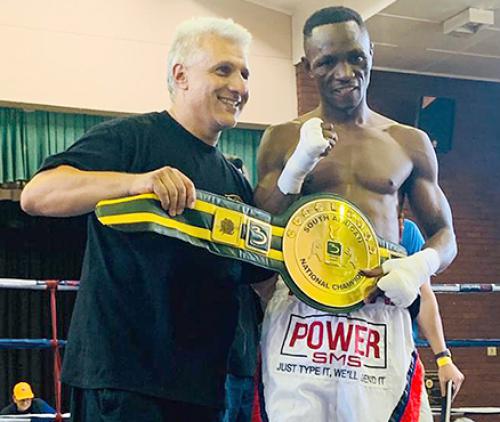 Tshifhiwa"Spider" Munyai displays his winner's belt, with his trainer, Alan Toweel, on the left. Photo suppplied.

Munyai said Mvula was a strong opponent and he had enhanced his chances of challenging for higher honours.

In 2003, he moved from Vhembe to Johannesburg, trying to find a manager who could mentor him in order to realize his dream of becoming a professional boxer. He met with several managers and trainers since 2003, with the hope that he would get assisted into becoming a professional. This did not materialize, however, as they trained him until 2017 without getting an opponent to fight him during all this time.

This left him very frustrated and even contemplating quitting the sport for good. He said he had approached trainer Alan Toweel in 2018.

He thanked Mr Toweel for guiding him every time. “I’m very happy that I’ve won, but my main goal is to go further into professional boxing, because I’m now ready. Boxing is a good sport that stops young people from engaging in bad habits such as drugs and alcohol, because you will spend lots of time at the gym,” he said. His message to young people who want to join boxing is that it does not matter where you come from, as long as you can be a good boxer.

Toweel described his as a dedicated and committed boxer who always attends training sessions and does well at the gym. “The man is very gifted and if he gets the necessary support, he has the potential to win any title,” he said.