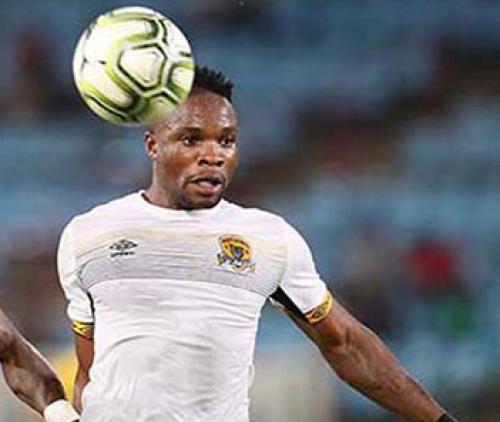 Back from injury. Black Leopards' right back, Isaac Masia.

Black Leopards on the road again

After their abandoned DStv Premiership league game against Lamontville Golden Arrows at the Sugar Ray Xulu Stadium in Durban on Tuesday evening, Black Leopards did not come back home. Instead, they flew directly to Cape Town the following day and started with their preparations for their next fixture against Stellenbosch FC, scheduled for this Friday evening.

Their game against Golden Arrows on Tuesday was called off because of the waterlogged pitch, caused by the heavy showers that fell in the area shortly before the scheduled 17:00 starting time. Speaking to Limpopo Mirror shortly after the game was called off, Black leopards’ head coach, Mr Dylan Kerr, could not hide his disappointment over the phone.

He revealed that although the situation was beyond everyone’s control, the decision to call the game off had added to the pressure on the team. “Look, we are lying at the bottom of the log and the other relegation candidates had won their games, which brings more pressure to my team,” he said.  He reiterated the fact that his wish was to play the game and get at least a point to reduce the amount of pressure to the team.

The good news for Lidoda duvha is that their right back, Isaac Masia, has fully recovered from the injury he sustained in their promotional playoffs campaign about four months ago. Should he be given a chance on Friday, Masia is likely to form a good combination with Edwin Gyimah, Pentjie Zulu and Ethen Samson at the back.

The other weekend fixtures are: Baroka FC vs Mamelodi Sundowns, TS Galaxy vs Supersport United, Golden Arrows vs Chippa United, TTM vs Cape Town City, Kaizer Chiefs vs Maritzburg United, Bloemfontein Celtic vs Amazulu and Orlando Pirates vs Moroka Swallows. The fixtures for next Wednesday (13 January) are TTM vs Orlando Pirates, Amazulu vs Kaizer Chiefs and Supersport United vs Bloemfontein Celtic.